Few things illustrate the good life like a hot tub on the back porch or patio. On a whim, you can slip into your spa and enjoy a deep jet massage, surrounded by warm water. With a chilled drink at the ready, you’re bringing simple perfection to life. But it gets even better when you can skip past a majority of the work it takes to maintain this crystal-clean oasis.

While hot tubs offer a great way to relax, they do take regular maintenance and water care. And not everyone is willing to commit to carefully measuring out chlorine every other day and troubleshooting with test strips. The prospect of draining, refilling, and balancing the chemistry of the spa water every three months begins to muddle that picture of relaxed simplicity we’ve been imagining.

Short of hiring someone to maintain your spa, what are your options for a more hands-off process? If you’ve been putting off buying a hot tub due to maintenance and service concerns, you’ll be interested to learn about how new water care systems reduce the amount of servicing a hot tub needs. The latest salt water systems, in particular, are designed to be largely self-sufficient while delivering some of the gentlest water you could hope for. Chemical water sanitizers come from a class of elements called halogens that include chlorine, bromine, and iodine—all of which are used to purify water. These chemicals have, typically, been the go-to for water sanitizing. They conveniently form salts with other compounds at room temperature. In fact, the name halogen means “salt producing.” In salt form, these chemicals are safe to store, and when introduced to the spa water, they dissolve so the chlorine, bromine, and iodine can bond with hydrogen to produce acids strong enough to kill bacteria and keep spa water safe.

The downside to using these chemicals is that they are reactive and will bond with other compounds in the water, such as the oils from skin and body lotions. In the case of chlorine, this often results in the creation of chloramine compounds, which are what give chlorine pools their famous smell. These new compounds aren’t effective at killing bacteria, so more chlorine must be added.

Most hot tubs require a measured dosage of chlorine be added to the water every other day to replace the chlorine that has bonded with other chemicals and become ineffective. Over time, the chloramines build up in the water—along with the stabilizing compounds included with solid chlorine—creating water with a distinct feel and smell.

At this point, about three months after a water change, the spa needs to be drained and filled with fresh, chemically balanced water. It is a time-consuming process that takes up time better spent enjoying a relaxing soak. When you have to repeat this process up to four times a year, you’re also having to use a substantial amount of water. Caldera Spas® is rewriting this tired story. 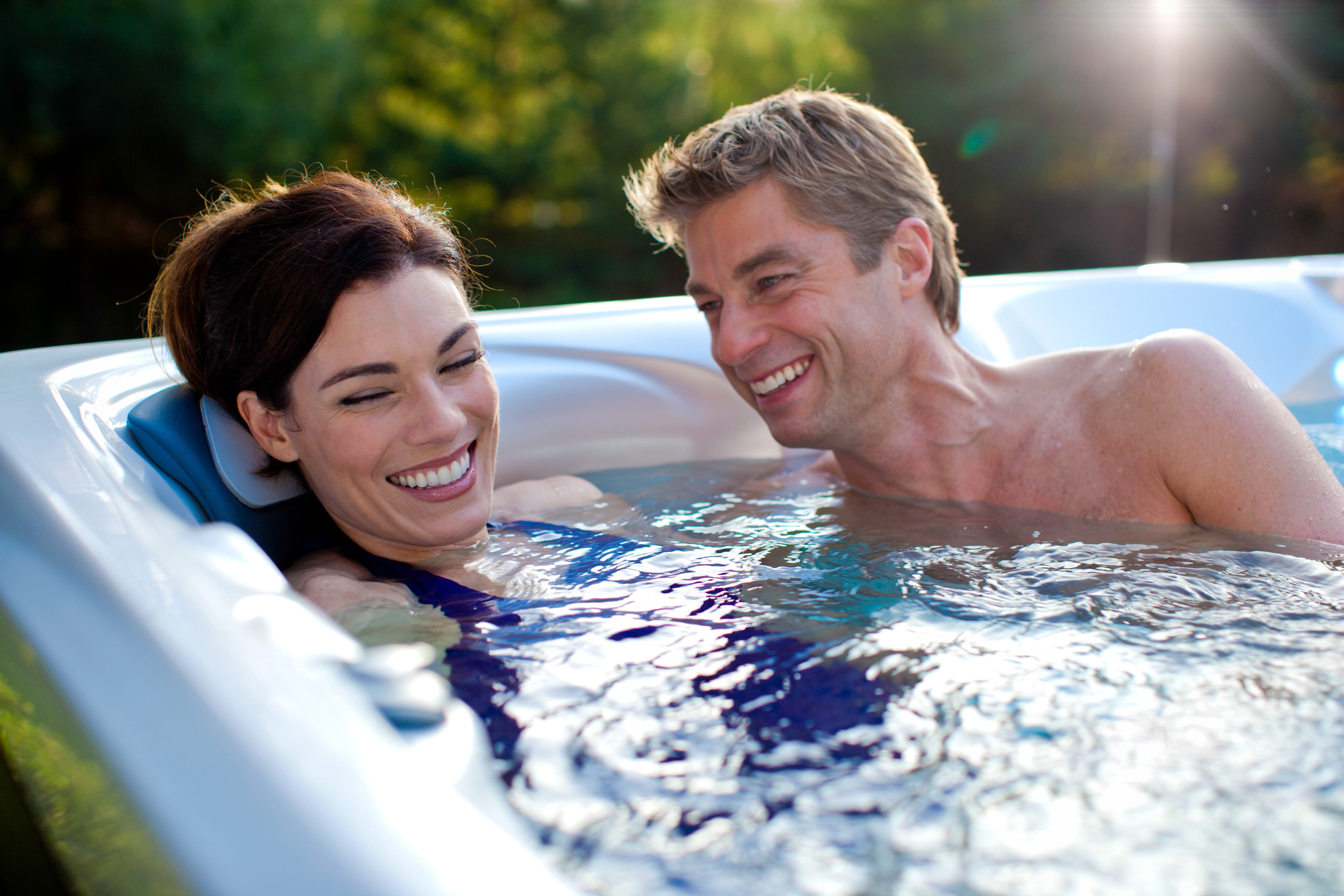 At Caldera Spas® we’ve always known that the ultimate hot tub experience means you benefit from the relaxing warmth of your hot tub every day with minimal fuss. Water care and composition is at the core of this experience, which is why we’ve created the FreshWater® Salt System*. The FreshWater® Salt System generates chlorine from salt. There is less of a need to add chlorine to the water—compared to traditional water care systems—as the cartridge typically provides enough to last for four months, and a convenient three-pack of these cartridges are enough to last for a full year*. The FreshWater® Salt System keeps chlorine levels low and that gives spa owners the following benefits:

It should be noted that there are some things that can shorten the life of your water. Heavy use that brings in a lot of contaminants will use up the chlorine quicker. If you use your spa regularly after working out and don’t bother to rinse off the sweat, you may get less than a full year out of your spa water. Heavy bather loads that fill the spa to maximum capacity may have a similar effect. However, the time it takes to perform hot tub maintenance is still far less than with other spas.

Following these simple steps at start-up will ensure the ongoing success of your FreshWater® Salt System. Watch the video below to learn more or read our startup guide here.

A spa equipped with the FreshWater® Salt System requires far less hot tub maintenance and service than most other spas. You’re free to enjoy your daily soak and the wellness benefits with less hassle.

The FreshWater® Salt System is an example of our dedication to providing quality spas that are reliable and ready to use whenever you’re in the mood. We make sure that hot tub water care, maintenance, and service can be taken care of easily, with less stress.

CalderaSpas® is dedicated to providing the best and most reliable hot tubs, offering the latest in innovative design and technology to help our customers enjoy the wellness benefits every day. To learn more about the FreshWater® Salt System and the hot tub series from Caldera Spas, request a brochure.

*The FreshWater® Salt System cannot be used on Caldera® hot tubs manufactured prior to 2019.

**Factors such as bather load and water chemistry can impact water life. When the spa is properly maintained, a 3-pack of cartridges with the FreshWater® Salt System will keep water clean and fresh for a full year. Product availability depends on your region. Please check with your local dealer.

The Best-Rated Hot Tubs are Manufactured by TradeCertified™  Companies

Hot tubs can relieve stress and anxiety and they help relieve pain from arthritis.